OptoGait acquires numerical parameters in real-time
for gait, running and jump tests that can be viewed
immediately.

The easy to read report contains all data, and asymmetries between
the two legs are highlighted instantly. OptoGait does not only detect the
numerical data, but, via small cameras, which can be freely positioned,
it allows the user to acquire images of carried out tests, synchronising
them perfectly with detected events. Without the need for any further
synchronisation between hardware and cameras, the numerous benefits
of cross verification of data and images can be fully used. A more detailed
video analysis can be had by further utilizing the dedicated utility (angle,
distance calculus, graphic tools, etc.). 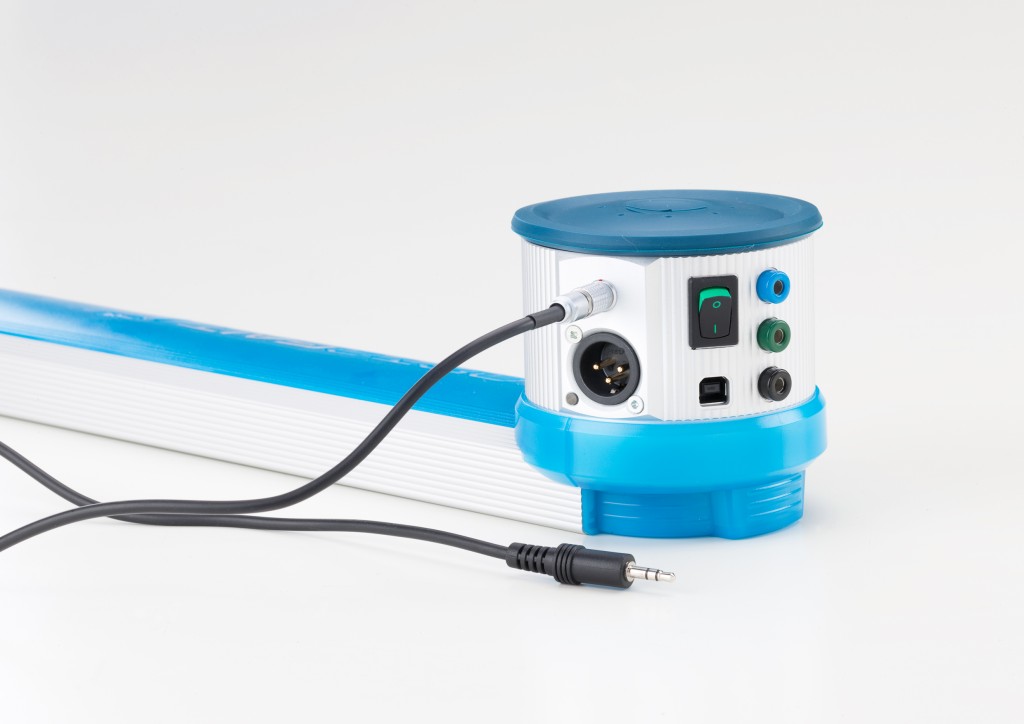 Positioned on the side bars of any treadmill (simply leaned on or permanently
fixed with adhesive-tape), OptoGait becomes a portable lab for small
spaces and with reduced costs. The system is compatible with the wide
majority of treadmills and no synchronization is necessary to start and carry out
a test. 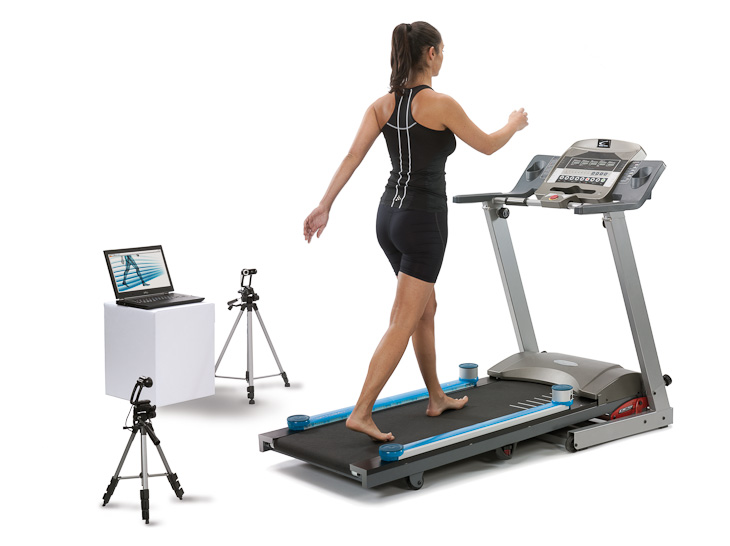 The Gait report is designed specific
for walking or running: 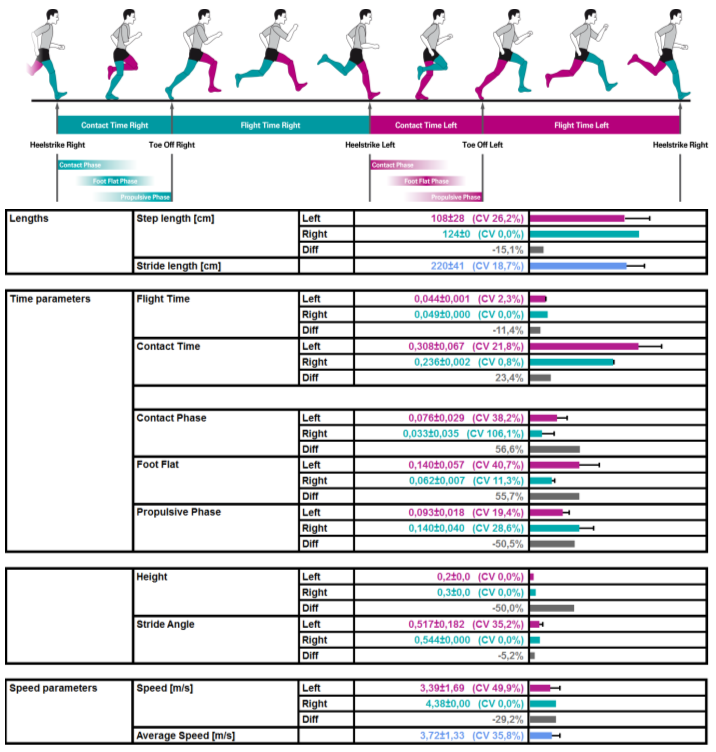 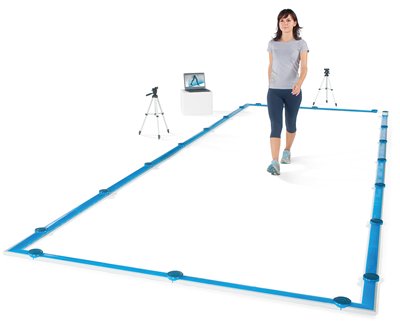 Starting from version 1.7 of the OptoGait software it is possible to use a particular
bar configuration for obtaining a two-dimensional measurement area. To the
classic bars (which we will call X), more bars (Y) can be added to form a rectangle,
where new information can be gathered for the gait tests: 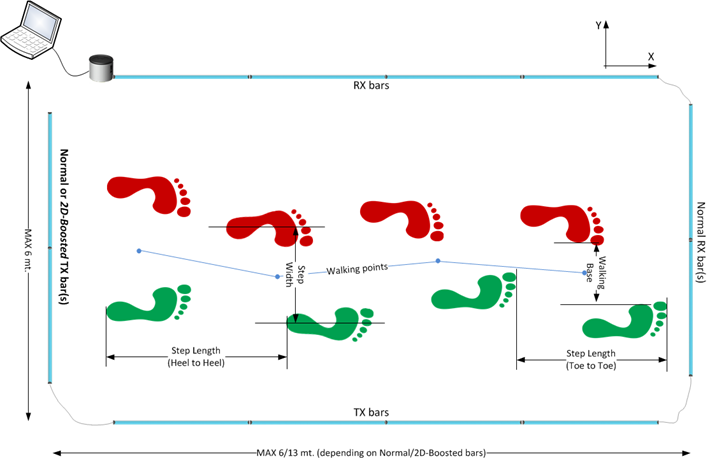 Here you will find some examples of protocols you can perform with different OptoGait configurations:

Many more tests can be performed using the OptoGait system (e.g., zig zag, twist
and turn, obstacles). Not everyone can be symmetrical, and some sports actually
require asymmetry for enhanced performance. The OptoGait systems will measure
left/right differentials. It is up to the doctors, therapists, trainers, etc. to fix, maintain,
or enhance their differentials, deciding if the asymmetry is ideal or needs to be corrected.

This precise measurement of asymmetry allows range of motion/step ability to be
quantified to ensure symmetrical development. By having a client do three consecutive
jumps on each leg, we can determine the rhythm of power via analysis of contact and flight
times. As with gait rhythm, our goal is to maximally reduce the contact and flight time
asymmetries. We may get a false reading of the athlete’s performance/rehabilitation if we
only compare distance achieved for each jump. Accordingly, we must account for the time
to “load and explode” (contact time) or eccentric/concentric. If a client can jump 20 inches
on his/her left leg three times and 20 inches on his/her right leg three times, but the time
of landing and takeoff is different for each leg, an imbalance still exists. We must note this
difference of “load and explode” (contact time) and direct our interventions at restoring
contact time symmetry. This difference in eccentric/concentric ability defines “rhythm of power.”

A classic example is a treadmill gait test, where the patient has a monitor in front of him/her
(better if a large-screen TV), where the operator can choose which parameter among those
available to display, depending on the pathology or rehabilitation.

During the gait test, the patient receives a numerical/graphical feedback
(in the form of green/orange/red colors and up/down arrow symbols) indicating what is not
‘working’ and how to correct it (e.g. making the left gait longer or increasing the rhythm, etc.

The new feature (presently available only for Sprint and Gait Tests; Treadmill Gait, Treadmill Run, and Tapping)
is found in Test Module > Execute > Configure, with the two parameters ‘Output second monitor’ and
‘Save Test Data.’ 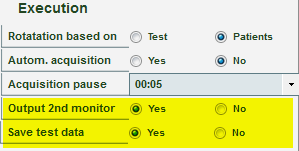 When the ‘Output Second Monitor‘ option is selected, a window is created on the second
monitor (or on the same monitor, when the second one is not physically present), where the
displaying of one test parameter asymmetry can be configured (e.g. the step length for a gait test)
both as a numerical value and as a graphical bar display.

Instead the ‘Save Test Data‘ parameter is used (if set on No) when, as previously described,
the patient must ‘exercise’ and it is not necessary to save the test at the end of the trial. In this
case no data ‘sampling’ and, most of all, no webcam video sampling is carried out, thus reducing
the used disk space (temporary video files and memory swap files) as well as CPU use.

The parameter to be displayed is configured in the second window on a side panel bar, which can
be minimized (<< key).

The parameters, which can be set, are the following: 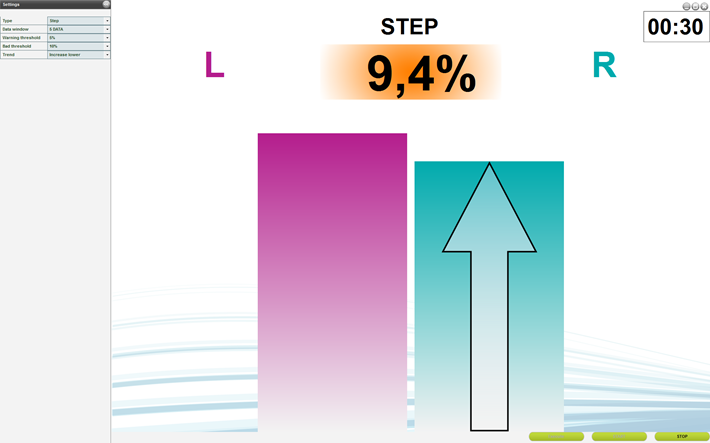 The BioFeedback module (available as of version 1.10) was inspired by the “Video Feedback”
feature where the user can see some basic test parameters in real time on a second monitor
(usually a large TV or a screen/tablet placed in front of the treadmill).

By trying to optimize these parameters while performing the test, for example by minimising
asymmetries or lengthening the stride, the patient “trains” and uses the system as a working
tool instead of as an instrument of diagnosis.

The main difference compared to the normal tests described in the previous sections is that
data are NOT saved in the BioFeedback module and are NOT paired with any user; it is just
a very fast “start & run” module with a minimal user interface, designed also to be used directly by
the end patient instead of by the technician/operator.

BioFeedack module is available for treadmill walk/run tests and march in place.

A handy interface, with panels that can be hidden, lets the operator or the patient set the “bad”
and “warning” thresholds and some parameters as reference values, starting foot, treadmill speed
and rhythm of the metronome. 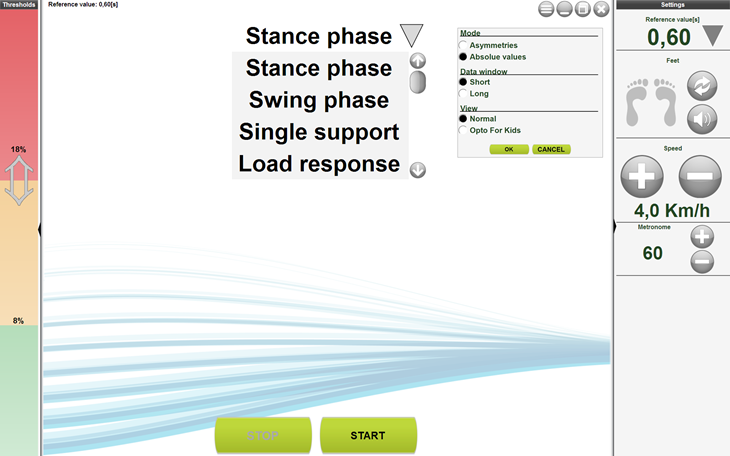