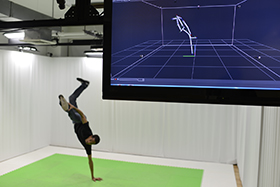 Animators and game developers are under more time and cost pressure than ever. Motion capture can make a critical difference in a project’s time-line, but the overhead of today’s marker-based systems makes the pipeline much more expensive than it should be. Organic Motion’s OpenStage 2 was developed specifically to address this challenge, by providing the easiest-to-use, most cost-effective professional motion capture system available today. With OpenStage 2 animators and game developers can deliver accurate motion capture character animation data without the need for any setup – no dedicated technician, special suits, or markers. Just have the actor step into the capture space and get started.

Forget complex scheduling. No more expensive outsourcing to overloaded studios. Organic Motion’s OpenStage 2 motion capture system is “always on”, so anytime you need to record a new motion, just step into the system as you are and do it. Markerless motion capture makes OpenStage 2 the easiest to use, most cost-effective system and the only choice for pre-visualization, quick captures or last minute sessions.

Animators and game developers use the OpenStage 2 system to immediately create poses for the key characters, and then create the frames between those poses. This process is repeatable until the perfect pose is achieved. OpenStage 2 gives provides a simple, cost-effective way to reduce the cost of keyframe-based animation.

Build Your Own Motion Library

Having a good collection of third-party motion data can save time, but it usually isn’t exactly what you need. With OpenStage 2 you can easily build your own library of reusable actions and poses based on real human motions. Since OpenStage 2 provides accurate full 3D data, the actions can be scaled, rotated or moved as required with animation software like MotionBuilder.